8 Channels Of Intercom
One single user connected to the unit can listen to and communicate with 8 separate locations on the network. Depending upon how the Dante network has been routed the incoming audio circuits and outgoing circuits can be different locations.

2 Racks make 16 Channels
Two Beatrice R8 racks can be joined together by just a pair of digital S/PDIF cables making a fully featured 2RU 16 channel intercom unit, with groups, mics, speakers and other resources shared between the 2 units.

Dante Routing & Partyline
Audio routing to/ from other devices is set up using Dante controller which allows for point to multipoint routing on outgoing circuits (but only 1 single incoming circuit for each of the 8 channels). Therefore we’ve included an inbuilt fixed ratio 14 input 19 output mixer matrix with inputs and outputs connected directly to the Dante / AES67 network which allows for setting up partyline and complex group circuits.

Onboard Mic & External Mic Input
A good quality, clear sounding microphone amplifier, designed for communication purposes, is fitted which also has the benefit of a compressor/ limiter circuit to help keep levels and intelligibility consistent even when the operator gets overly excited. This microphone amp has two microphone sources, either the inbuilt front panel mounted electret capsule which provides good voice intelligibility from normal working distances, or a balanced XLR input for connecting external gooseneck microphones. Twelve Volt Phantom power is also available and can be turned on/ off as required via an internal link.

High Output Intelligible Loudspeaker
What’s the point of an intercom unit if the onboard speaker is so cheap that you can’t understand what is being said to you? We tried hundreds of different drive units before settling on the one used in the Beatrice R8. We chose it because it had a much cleaner sound and better frequency response for vocals than any other speaker on the market that would fit in a 1RU subrack.

Mains or PoE Powered
An inbuilt wide range switch mode mains power supply is fitted for powering the Beatrice R8. It is terminated with a standard IEC plug, making it easy to plug in wherever you are in the World. The unit can also be powered via the Ethernet cable by standard PoE (Power over Ethernet) on either of the copper Ethernet ports. The PoE power can be supplied by an external PoE switch or a midspan power injector.

Redundant Twin Copper & Twin Fibre Ethernet Interface
When ultra reliable communications is needed for the utmost important jobs, glitch free redundant network circuits can be set up using the primary and secondary Dante network ports. There are 2 copper Ethernet ports on Neutrik Ethercons and also 2 fibre Ethernet ports presented as SFP slots (SFP modules not included). Redundant networks can be set up across any of these ports. These ports can also be set up as a network switch.

GPIO
There are nine solid state relay outputs. One of these outputs is triggered when any speak key is on (useful for dimming external loudspeakers or red light controls), the other eight are triggered individually when their associated channel receives a call. In total there are 12 loop closure inputs. 10 of these control the talk keys (the 8 channels, talk to group & talk to all) and the other 2 provide internal & external LS cuts.

Channel Input and Output Gain Controls
For maximum flexibility, gain can be applied to incoming audio signals and outgoing signals separately. A row of LEDs indicate the current gain setting when a channel's input or output is being adjusted.

Call Function
A simple call function is inbuilt allowing the operator of one unit to call/alert other users that they want to communicate with them. A simple double tap of the speak key initiates a calling signal sent to the other party. The audio presence indicator flashes to indicate that you have been called. As well as the flashing LED at the receiving end of the call, an audible ‘beep’ can be set to alert the user that an incoming call has been placed to them.

Monitor Selection
Each channel has an illuminated audio monitor switch. This allows the channels’ incoming audio circuit to be routed to the headphones/ loudspeakers. Using these switches makes it easy for an operator to monitor only the desired incoming audio channels.

Presence Indication
A front panel illuminated red switch is used to indicate the presence of incoming audio on that channel. When audio is detected on the channel the switches internal red LED is illuminated. The red LED then stays on for a short period after the incoming audio stops to help the operator identify who has been talking to them.

Speaker Output
As well as the front panel internal loudspeaker a balanced analogue output is provided for connecting to an external powered loudspeaker.

4-Wire Connectivity
Two traditional analogue 4-wire circuits can be connected to two of the R8's intercom channels by utilising the versatile analogue inputs and outputs.

Local Input and Output Circuits
For increased versatility there are 2 local balanced analogue audio inputs and 2 local balanced analogue outputs. The inputs have input gain controls and presence detectors on them (just like an intercom’s channel input) and are routed directly to two output channels on the Dante / AES67 network. The outputs are fed directly from two input channels from the Dante / AES67 network.

Mixer Matrix For Partyline
For setting up more complex groups and partyline circuits that could not be achieved via Dante controller or your AES67 router, an inbuilt fixed ratio mixer is supplied. It has 14 audio inputs direct from the network and 19 mix outputs to the network. Five of the mixers have inbuilt automatic audio ducking circuits.
Product Information: https://www.glensound.co.uk/product-details/beatrice-r8/
Manufacturer: GLENSOUND 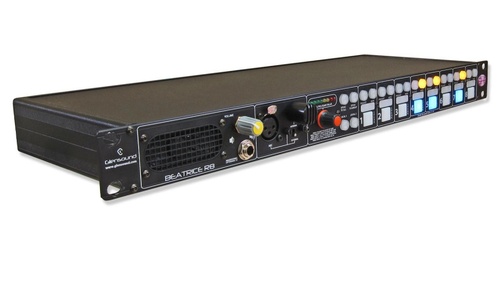 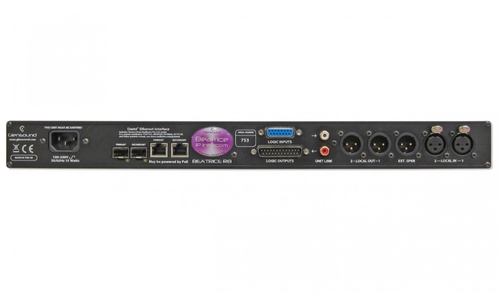 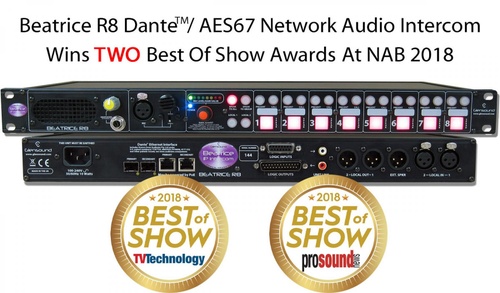